Klout ... it reminds me of a Scott Westerfeld novel

Has anyone else heard of Klout? It's like a social networking site that tracks how influential you are, based on your activity and responses in other social networking venues. This is all brand new information for me.

I just recently added myself to Klout and, surprisingly, I'm semi-addicted to checking my Klout scores every few days. And to be honest, I don't even know what it means. Yesterday I was a 49 today I'm a 50. Apparently Barack Obama is a 100 and Britney Spears is around 90-something. So really, I have no idea what my "50" actually means, but there's something about scores that are addicting.

It's like my blog. I LOVE checking the stats on my viewers and on the number of views I get. I'm still amazed at how many views I get from countries like Russia, Germany and the UK. It's amazing that I've reached so many people and I'm so grateful!

But there's something funny about this whole situation. It reminds me of a Scott Westerfeld novel. Specifically, "Extras" in which currency doesn't quite exist but is replaced by credits that you get for how influential and productive you are in society. Westerfeld's characters are obsessed with being influential over the internets. They kick stories and see how many people respond, going to incredible lengths to kick the best stories that will gather attention from the world.

Isn't that what we're doing? I mean, by blogging and by using something like Klout? Is there something that I'm missing here? Blogging for me is like having my own column in a newspaper or magazine. A place of writing-freedom. It's an author's dream. I'm grateful just to have an avenue in which to write, but to be able to influence others... there's something so powerful about that.

The thing about power though, is that people always want to harness it. And then exploit it. I really don't care to compare myself to Obama or Britney, but using Klout has me thinking... how far away is our reality from great science fiction novels?

Plastic surgery (or "surge") is already a reality. I myself having had my breast reduction am now considering laser eye surgery to correct my terrible vision. It's amazing what we can already do, but think of how close we are to other types of "surge". Also talking about Westerfeld's novel, we already have Maglev technology! I had no idea! 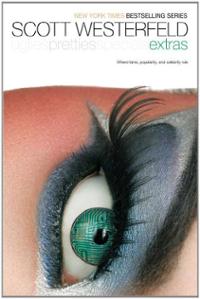 Most of the sci-fi novels that I read have a similar theme: what happens when humans fail and the earth can no longer support us. Sometimes I truly believe that James Dashner might not even be that far off. (Spoiler alert!) We develop a virus to control the population and it unpredictably mutates at an alarming rate... Sun flares hit the earth creating mass destruction... and the virus spreads like wildfire, embedding into our brains essentially turning anyone who isn't immune into a zombie-like being. Maybe a zombie apocalypse is a little far fetched, but setting an unpredictable virus on the loose sounds just like something our governments would do in desperate times.

I guess only time will tell. It's scary to think of where we're heading, and how infinite the possibilities are. How far will we go until we're exactly like a sci-fi novel? I think Westerfeld accurately captures the essence of human nature. His earlier novels like "Pretties" and "Specials" depicts how governments think, and what actions they take based on the actions taken against them. It's eye-opening when you see the similarities. Although they might seem like superficial books, his writing truly reveals so many levels of human thought and development.
Posted by The Healthy Fox at 3:41 PM