Whenever I hear about a "group" assignment, I cringe a little inside. I don't think it's an aversion to working with others, but it's all the little problems that go along with it. It's like first episode of Survivor where all the contestants must work together, or they'll probably die in their sleep.... except I don't think anyone has died yet from not participating in a group project... 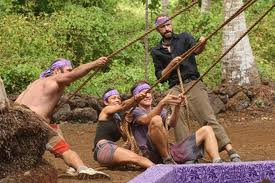 So really, when you think about it, would you rather be stuck on an island alone and have to do all the work yourself, but not deal with a whole shwoop-a-loop of people? Or be stuck on an island with a group and face the challenge of working together (knowing that you'll have the hard workers and the shit-sippers all mixed together) but ultimately do less work than you would have alone?
Posted by The Healthy Fox at 10:04 AM