So.. without [God] we'd have less Grammy winners and Superbowl champs?

I don't want to talk religion, but I've had this thought stuck in my head for a while. A friend of mine recently ranted about the fact that professional athletes thank god for their performance. In his mind it was ridiculous to give credit to some supreme being when athletes themselves do all the work. But do they? Do we? I kept my mouth shut at the time, because I really wanted to think about it... but that never ends well. It's been stewing in me for a while.

Can you think of many actors or singers/artists who don't thank God when they win an award? Or what about professional athletes - how many of them pray in the locker room or send a little shout out up to the sky when they get a touch down?

I personally have never scored a touchdown in football, nor have I ever won a (real) academy award (yes, I have given myself a couple artificial ones in the past), but when I'm in a rush and driving somewhere and I get a string of green lights, I do give a shout out to the Universe. I say thank you to the sky, as if the powers of the Universe are looking out for me. Just like I would get pissed off if I was late for something and hit every red light, or if the subway broke down. In those instances though, I usually look up and yell "Seriously?!?" 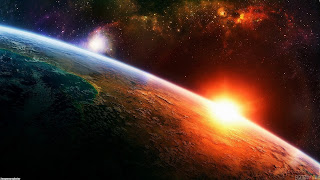 I said I'm not religious, but I do have faith in the universe. How can you not?! Have you seen even a fraction of our universe? It's incredible! There are giant rocks from space hitting our planet and you're telling me you don't believe in anything? Granted, I'm a science nerd at heart. Biology is my second language. But I was awoken this morning by a bright light shining on my face: There is a giant fireball-star bigger than any planet around us that I can see from my window. It's perfectly spherical made of magma and gases, it gives me vitamin D, it keeps me warm and is the perfect wake up call. We all take the Sun for granted at some time or another, but when you think about it, aren't you amazed at our universe?

I feel like we get so stuck in our day-to-day that we forget how incredible this planet is - and how HUGE is it. So I have to believe in something more. You don't. You can believe in whatever you want. But if someone feels like saying thank you - for anything - then I think that makes our planet and our species just a little more special and happier.

I truly believe that the more love and gratitude we send out, the more we receive. Maybe that's why Oscar winners always thank god, because god (or whatever they believe in) sends more right back to them.
Posted by The Healthy Fox at 9:45 AM