The day of napping

Well, we made it safely to Florida! Day one of vacation I would call "The day of napping." Traveling all through the night was exhausting (it was 12 hours of driving and flights and stop overs and a shuttle bus). I fell asleep at every chance I got but I know I had some REM sleep debt to pay off. So by the time we finally were able to check in I just fell right on the bed. What was suppose to be a 15-minute power nap turned into a 5 hour sleep... We woke up at 7:30pm and panicked for 2 reasons:

1) We had free drink tickets that expired at 10pm
2) We still had to do grocery shopping... and liquor shopping before sundown. But apparently in the USA you can do both in the same store. So bizarre.

So by the time we were done shopping it was already dark outside... and waited 30 minutes for a cab that never showed up. I was shocked that a few people actually offered to drive us home. One of which we actually took up on the offer.

Now I know what you're thinking... You're not suppose to go with strangers. And you're right. But I felt okay with the decision for a few reasons:

1) My boyfriend is a ninja... like seriously.
2) The sun was long gone and there was no way we were going to walk back.
3) This lady was hilarious... She didn't exactly know how to work the lights/high beams on her car... she was yelling at her husband in Spanish out the window - while he was in his own car with the window rolled up; and the music that came on in the car was this mellow cabana music... the whole situation was hilarious. But she was the sweetest lady and we were sooo grateful for the safe ride home.

Unfortunately we never did get to claim our free drinks, which is painful to someone like me who loves free stuff! 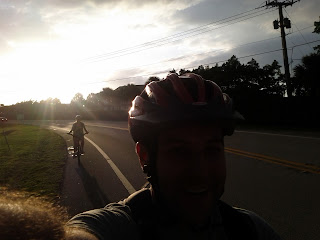 Day 2 was a much more "productive/fun" day. We took an amazing walk down the beach in the morning and went on a biking adventure all afternoon. The ride was awesome! We passed a state park which was just a jungle of palm trees.

The one thing that I have noticed in the states is that they have no problem writing "high fructose corn syrup" right on their labels. THEY PUT IT IN THEIR APPLESAUCE! That's just crazy! The first day we had lunch I checked the label on the ketchup bottle at our table and sure enough it's there too. I just don't understand. I know it's a cheap sweetener and corn is subsidized by the government (which still infuriates me), but why would people buy it if they can read right on the label that it's there? Not just corn syrup but high fructose corn syrup. You might as well just start injecting yourself with diabetes. 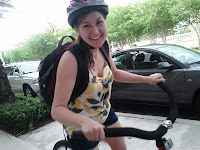 However, we did find gluten-free flax crackers for our guacamole and my FAVOURITE Sahale snack almonds, so I have to give America credit for that. And although I'm still trying to get used to America's traffic lights (which are much more complicated here  than in Canada), biking has been one of my favourite things to do so far- made so much easier with bike lanes! More adventures to come...
Posted by The Healthy Fox at 9:22 PM