I'm back! And with a new Hot and Sour Soup recipe

After vacationing in BC, it's taken a while for me to get back to ... well... being me I guess. Lack of sleep is NOT my friend. I'll post more about my adventures on the West coast a bit later, but for now, it's time to cozy up with a warm cuppa soup, and here's today's "cooking experiment gone amazing!" 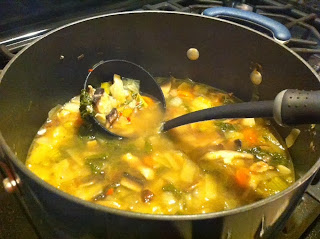 This was a recipe I just made up on the fly. I was going for a mushroom/vegetable soup, but then I got hit with the inspiration of garlic... and then I thought I should spice it up a bit with some chilli flakes, and before I knew it, I was adding apple cider vinegar and it was a Hot and Sour Soup - the best I've ever made! I never actually measure anything, so everything listed is an estimate.

Mushroom Hot and Sour Soup
(this might seem like a lot of ingredients, but half of these items are staples in my kitchen, and the others are extra veggies I picked up and had in my fridge... and I was craving bacon)

Add oil and butter to large/wide soup pot and heat on medium-high heat. Add onions and let cook for about 5 minutes stirring occasionally until they begin to soften.

Add bacon and mushrooms. Stir and let cook another 5 minutes.

Add chicken broth to pot. Bring to boil, then reduce heat to low, cover and simmer for about 35 minutes. Add minced garlic, chili flakes and honey and simmer covered for another 5 minutes. Add apple cider vinegar and salt and pepper to taste. Then serve!
Posted by The Healthy Fox at 10:17 PM