I've been gluten-free for about 8 years now. What that means in reality is that 99% of the time I eat only foods that are gluten-free, with about 1% of the time, having some sort of exposure to wheat-based grains. I don't mean that I have "cheat days" but I'll consume something at a restaurant that may not be completely wheat/gluten-free. Not breads, pastas, nor pastries... those have always been off-limits.

But that all changed when my husband and I decided to honeymoon in Italy. I knew that they used a different species of wheat in Europe, and had heard that those with gluten/wheat sensitivities often can tolerate bread and pasta way better there than in North America.

I was intrigued and excited to eat real bread and pasta for the first time in almost a decade. My goal was to eat and drink my way through Italy and see what happened. I was going to eat real baguette bread; I was going to enjoy a pastry at a cafe; Focaccia in a market. Hell, maybe even pizza!

So I did. I ate it all and for the most part I loved it all, but there were lessons that I learned with each meal:

First, not every restaurant or venue gets their flour from Italy. I made an incorrect assumption that our Mediterranean cruise would be serving local foods. I soon found out that even their beef came from Chicago (which induced a huge "WTF?!?" moment for me). Pasta, I learned, had to be labeled specifically as "durum wheat" pasta. But the breads and pizza still left me bloated, gassy... my insides were not happy even if my taste buds were.

Off the boat, food was much easier. I wasn't having reactions from independent/family run restaurants. Anything that was non-touristy seemed to be fantastic, and my gut agreed. I was able to eat focaccia in Venazza, pasta in Taormina and Genoa, and croissants in Florence with no issues. It was glorious. I was able to enjoy heavy starches that didn't feel so heavy. 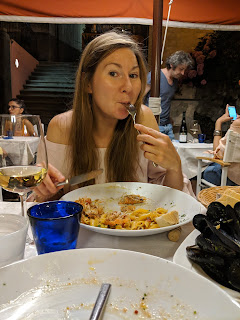 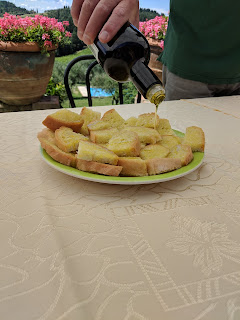 I felt like I had an excuse to be indulgent; and perhaps I did. But that feeling wears out after a while. By the end of our 2-week vacation I was craving protein and vegetables. I was craving leafy salads and steamed broccoli drenched in olive oil. Not to mention that my waistline definitely widened being on a predominately carbohydrate-based diet.

They were gloriously happy-making meals for the time being, but it wasn't something that I would be able to continue. The body - my body - can only take so much. The challenge now is switching back. Getting my body back, reducing my carb and sugar cravings, and regulating my blood sugar.

The Aftermath of my Gluten Experiment

The last croissant I had was at the airport before we left Europe. It was everything I had hoped it would be, until I stopped to pay attention to my body. All of a sudden I felt anxious, my heart beating fast. What was going on? I realized it was my blood sugar. Having only had a croissant, my heart was racing and I felt like I needed a run. I knew this was a pattern I'd have to get out of. This spike in blood sugar was uncomfortable, but all too common.

Secondly, the residual carb cravings after having come back. I almost forgot how strong they could be! Telling me to go bake a batch of cookies, or eat more of that sunflower seed bread, or, how about a third serving of rice? It's so hard to battle that voice; even more so when you're feeling exhausted.

Thirdly, by the end of the two weeks, and more so in the two weeks upon our return, my skin broke out like crazy! Not just facial acne, but eczema!

What gets me through this part is knowing how good I can feel on a low-carb diet. My tastebuds and brain were spoiled in Italy. We deserve it! To enjoy the food of another country and culture is an experience not to be taken for granted, but for my own personal health, it's not a lifestyle I can thrive on long-term.

I'm so happy I took a chance (with the help of probiotics and digestive enzymes) eating Italian wheat products, but I'm even happier to be home so that I can stuff my face with veggies and proteins again.