Is organic really worth it? What are you getting for your extra monies?

So my partner knows I can be a bit quirky, but a recent discussion had him thinking I was downright insane until I performed an experiment to show him what on earth I was talking about.

Many of you know how much I'm in love with organic celery. It's the best effing celery I've ever had! When I see that my grocery store has organic celery in stock, I go crazy like a kid in Wonka's factory (not that I turn into a blueberry, or a stalk of celery for that fact, but that I want to take home all the organic celery that I can and eat it!).

My partner let this one slide because he knows I can be a little crazy. But then I tried organic cabbage and my world was turned upside down (in the best way possible).

I originally bought the organic one because it's a bit smaller, and for 1-2 people, I don't need a 10lb cabbage head. So the organic variety was the perfect size! Then I cut into it and was amazed...
This didn't look like the cabbage I was used to. The cabbage leaves looked like this intricate pattern of vegetable beauty.

So the other night while making dinner, I start telling him how incredible organic cabbage is and he wouldn't believe the difference! He looked at me like I was crazy, but cute, and I vowed to show him the ways of organic cabbage.

I went to the giant Loblaws in my neck of the woods (north Toronto) and got 2 cabbages: organic (left) and regular (right), and did a side-by-side comparison: 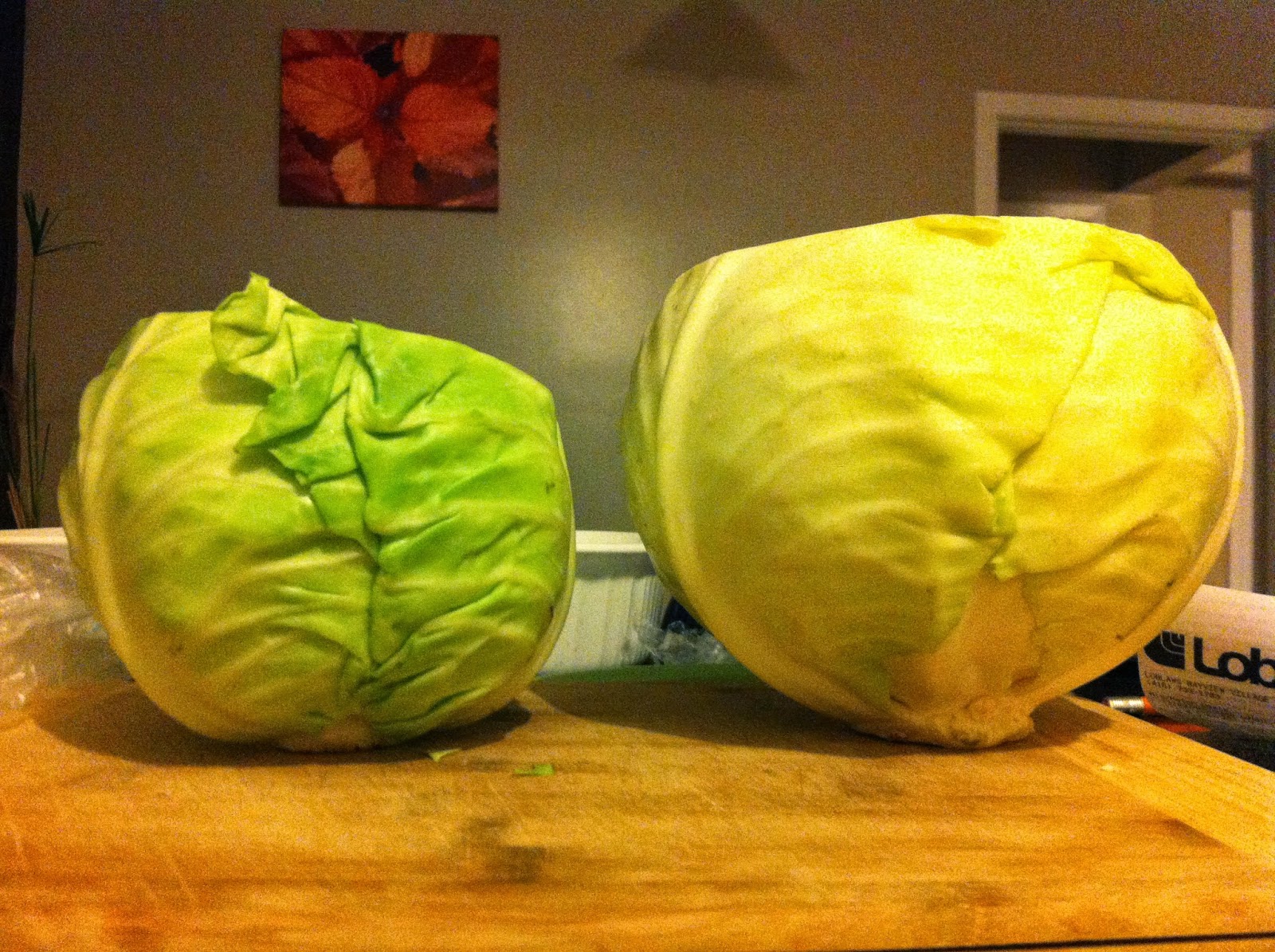 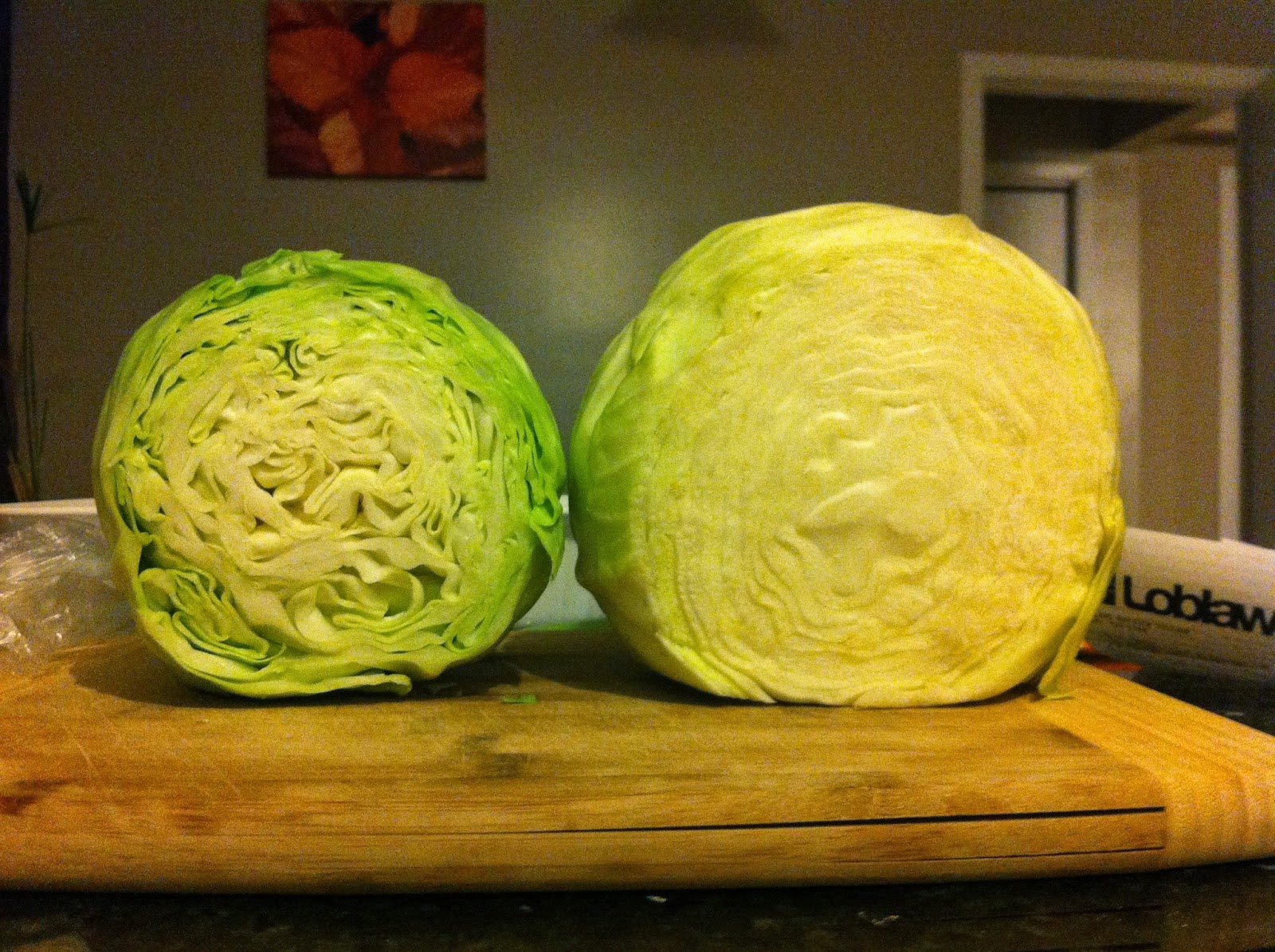 Okay, so my iPhone doesn't take the greatest quality pictures, but you can see the differences. Look at the colours, the pattern, the shape. Those are firm outer cabbage "leaves" on the left.. thick and crisp!

I showed my roommate and she agreed. And then we began to discuss how much better the one on the left probably tastes (and we were right).

So the big question: Is organic worth it?

When you buy produce it's a matter of quality. Looking at the two cabbages above, it probably wouldn't matter which one was organic and not... I would pick the cabbage on the left because it looks better, it looks more natural, it tastes better and the size is more proportionate to my kitchen/cooking needs.

If you can taste and see absolutely no difference between organic carrots and regular carrots, buy whichever is cheaper. But if you look at the two side-by-side and one obviously looks like the "healthier"/better carrot, than get that one.

There's another video out on YouTube with a little girl who shows the difference in sweet potatoes grown traditionally (with pesticides) and organic... the organic one sprouted and the regular one stayed in a type of "stasis" and did nothing. I also tried this... just keeping 2 kinds of sweet potatoes in my pantry, and low-and-behold! the organic one did in fact start sprouting roots while the regular one stayed a boring potato and eventually got soft and went bad.

The moral of the story: Something is worth the extra money if you decide it has that extra value. Stop worrying about what everyone else says... stop listening to the news and the fear that's associated with our food. Try it for yourself. Look at it, feel it, taste it. What is honestly the better quality product to you? Can you afford to buy the better quality?

Don't buy organic for organic's sake. Buy it because you think the product is awesome! because it tastes better, looks better and is more like a real plant. Pick and choose which produce items are worth it, and for everything else, just buy regular (like avocados... the organic vs. regular look and taste the same to me).

Remember that each time you buy something, you're voting for it! You're telling the supplier what you want to buy. And vote for WHERE you want to buy it. If you're super pissed off that a huge Wal-Mart just took over your town, then don't shop there... support your local businesses. Spring is almost here - buy from your local farmer's market!
Posted by The Healthy Fox at 10:05 AM