I've been puppy-sitting with my boyfriend this week and it turns out puppies are pretty demanding. Puppies don't understand blogging. They don't understand how to not jump in front of you when you're trying to go for a run. And they also apparently loose bladder control when strangers see them walking and want to pet them. The excitement of getting attention is just too much to handle!

I took a little tumble while trying to run with the puppy (who is now about 6 months old). Granted, I usually have problems walking in a straight line, but this time it was definitely not my clumsiness that caused my fall. And although I scraped up my knee pretty good, my Lululemon running pants remained indestructible! I can only imagine that superheros also use "Brushed Interlock Power Luxtreme" fabric for their costumes.

I'm proud to announce that I finished my very first official 5K run! Our school hosted the annual grad run on Sunday, with funds going to this year's graduating class. It was a chilly morning, but I layered up, had a great playlist ready and was on my way. The run was amazing! I was in such a good mood and so proud of myself for doing it that I stopped off at my usual trail on my way home and did another 4K! - like a victory lap... it was glorious. 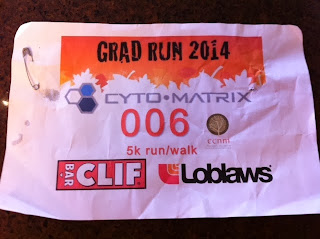 This was my first year ever really running and it took some practice to build up my endurance. But now that I'm at that point - running up to 6.5km without needing a break, or running up a hill and not needing to stop to catch my breath - running has become so enjoyable and so much easier.

If there's ever something you've wanted to do but don't think you're fit enough for it, don't let that stop you! Just give it a try. They call it "practice" for a reason. Work at it and don't give up. It's all worth it!