I'm one of those people who lives off of sunshine and heat. I love it. I love to sweat. When other Canadians complain about the humidity and heat warnings in the city, I smile, prance about (well, not quite), and take advantage of the fact that there is no snow on the ground. Seriously people... don't you remember what freezing rain looks like? Do you remember how much it sucked to drive after a snowfall? So I've been taking advantage of summer, and blogging has taken the back seat.

However, the good news is that in addition to taking advantage of the outdoors, I've been doing some paleo experimenting in the kitchen. A few recipes for my fox friends: 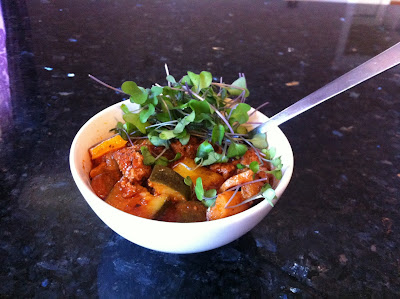 1) Cook ground beef until mostly brown. Drain some of the fat off and put beef with all other ingredients in a slow cooker (if you don't have a slow cooker, just use a really big pot).

2) For slow cooker: Set to low for 6 hours, or high for 4 hours 30 minutes.
For stovetop: Bring to a slow boil, reduce heat and simmer on low for an hour.

3) Season with salt and pepper and serve with microgreens/sprouts. 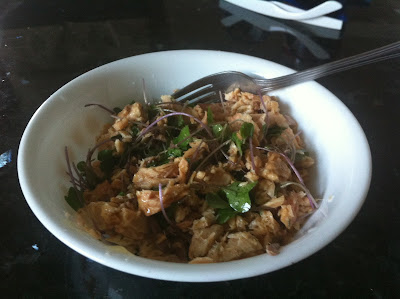 This isn't a typical recipe. I didn't really measure out anything. I just felt like salmon salad and mixed together some flavours that I thought would go nicely together.  This is an approximate, but the point is that you don't need a recipe to make something. Experiment!

1 can wild-caught pacific salmon (skinless, boneless)
1/2 tsp lemon zest
Juice from 1/2 of a lemon
2 tbsp EVOO (I really didn't measure this out.... just drizzled a bunch of olive oil over it)
1/4 tsp dried dill (or use fresh dill)
A splash of date-infused balsamic vinegar (optional- bought this from an oil and vinegar store in the states... so ridiculously delicious).
Smallest drizzle honey (for a bit of sweetness)
Salt and pepper
Microgreens or sprouts

Flake salmon with a fork to break up any huge chunks, then just gently toss everything together!

It's delicious just on it's own (as pictured above) or you could have it as a spread for rice crackers, with your favourite gluten-free bread (if you're not paleo)... You could even turn it into a "Salmon Melt" by putting it on toast, top with tomato slices and goat cheese and place under a broiler for a few minutes to warm through.

I also made a soup, but sorry, there's no picture.

1) Melt butter in large pot on medium heat. Add leeks and celery. Cook on medium-low heat for about 5 minutes until leeks have started to soften.
2) Add mushrooms, season with salt and pepper and cook for another 10 minutes until mushrooms have reduced. (don't let the onions burn! Add a smidgen more butter or 2 tbsps of water if the pot is starting to burn the leeks.)
3) Add all other ingredients. Bring to boil, reduce heat and simmer for 40 minutes, uncovered.
4) Remove from heat, add almond or coconut milk. Use an immersion blender to blend some of the soup, keeping a couple mushrooms as bigger pieces.
5) Reheat through, season with salt and pepper and serve.

I think this soup would be amazing with bacon in it or on it... that will be the next experiment.

Happy Kitchen Adventures!
Posted by The Healthy Fox at 4:35 PM